The CM4NANO has an RTC module on board, and the RTC module should be mounted on the I2C0 bus to prepare to maintain the stable operation of the system time when the network is disconnected. Before testing, please make sure that the button battery with CR1220 mode is inserted under the power-off condition. as shown in the figure below: 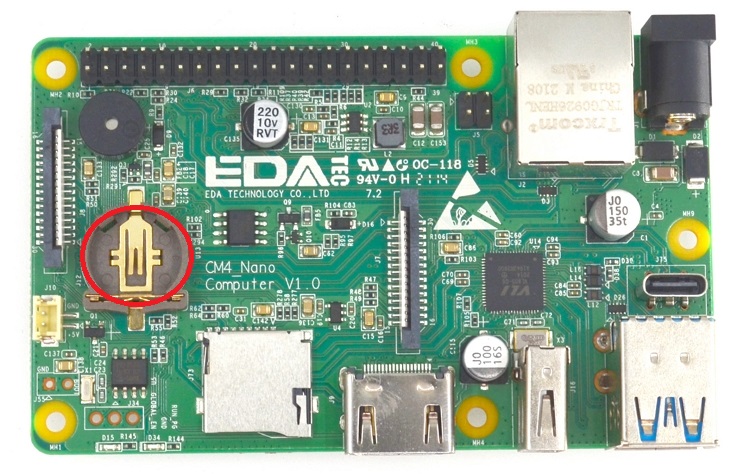 CM4 NANO has an SD card interface onboard, which only has the function of expanding the system storage. The system cannot be booted from the SD card, even if you successfully program the system to the SD card. In addition, this interface occupies GPIO22--GPIO27 in the standard 40pin interface, which also means that if you use GPIO22--GPIO27 pins or some pins for other functions, conflicts will occur. You can decide whether to add this feature according to your needs.

After shutting down, disconnect the power, insert the SD card into the SD card slot of the CM4NANO baseboard, and then power on to start the system. You can see the SD card icon on the desktop, as shown below: 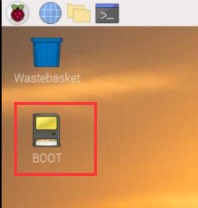 Short-circuit the BOOT pin and GND (J55) on CM4NANO, which can prevent the normal startup of the system when it is powered on, and is used to program the system. For the detailed usage process, please refer to install (opens new window). (Do not short-circuit BOOT and GND in other scenarios, otherwise the system will not start normally).

The CM4 can be supplied with an onboard wireless module based on the Broadcom BCM43456 supporting both:

NOTE: The wireless support is determined which CM4 purchased. Please refer to the ordering code for reference.

# Selection of Internal or External Antenna

It has an onboard PCB antenna, it also supports an external antenna.

The selection of internal or external antenna is done at boot time using the /boot/config.txt file, and can not be changed during operation.

CM4NANO provides a standard touch screen DSI interface (J8), which is connected to the official 7-inch touch screen for testing. Before testing, prepare a DSI cable and official touch screen. When disconnecting the power, pay attention to the insertion direction of the cable. The red wire is 5V and the black is GND, as shown in the following figure: 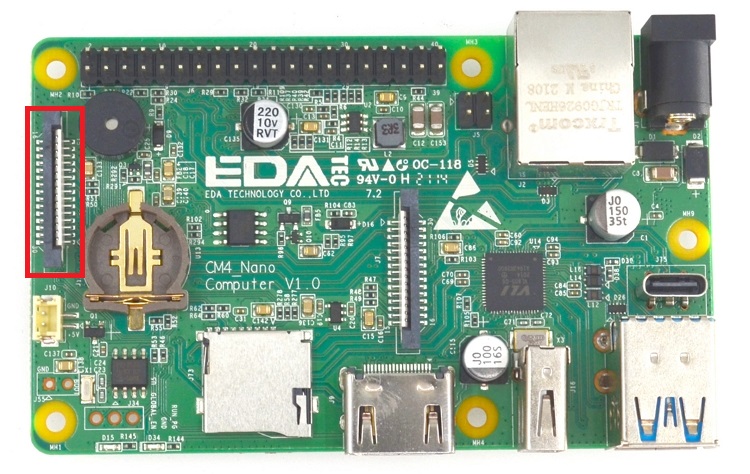 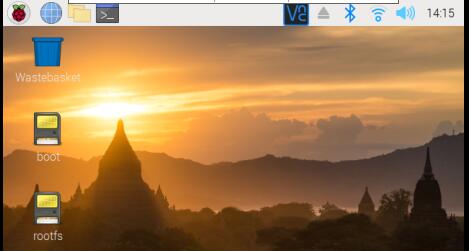 After power on, you can see the system interface on the touch screen, as shown in the figure below:

CM4NANO provides 1 standard camera CSI interface (J7), which can be connected to the official Raspberry Pi camera for testing. Please prepare a CSI cable and an official camera before testing. Connect when the power is off. Please pay attention to the insertion direction of the cable when connecting, as shown in the figure below: 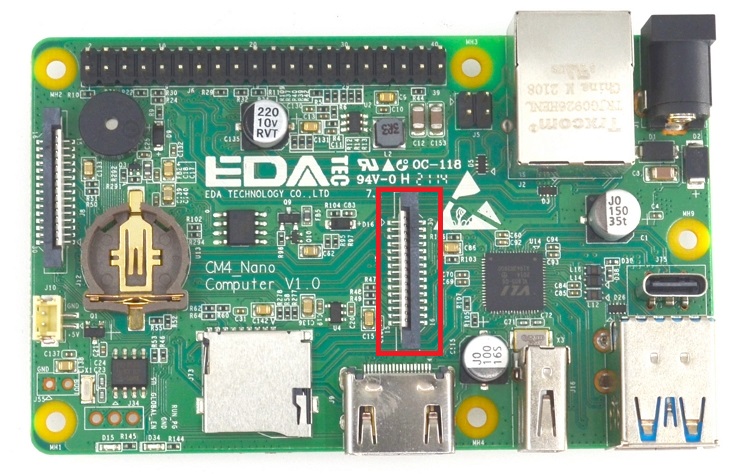 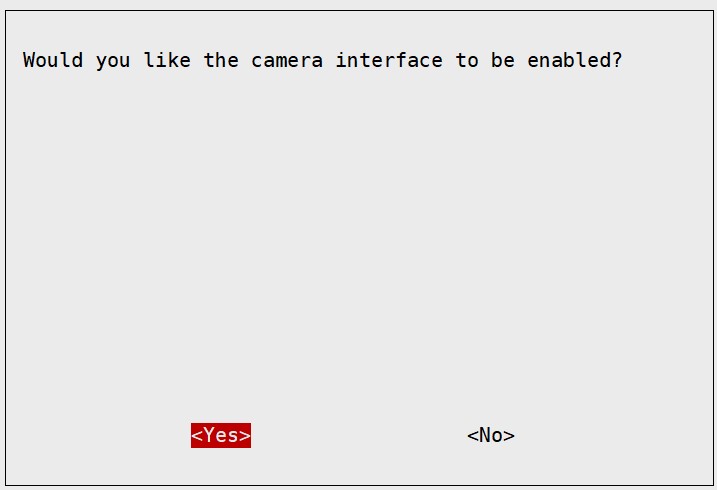 CM4NANO has a USB2.0 interface, which can be used to burn the system before starting (refer to "INSTALL (opens new window)"). After entering the system, it can also be used as a normal USB port to connect to a mouse or keyboard.

CM4 NANO has a buzzer on board, which is controlled by the high and low levels of the GPIO6 pin. After entering the system, enter the following command in the terminal to test:

CM4NANO has 3 USB3.0 ports onboard, two of which are USB typeA Host, and the other is USB typeC host, which can be connected to a USB flash drive for testing. The USB typeC host test requires an additional USB adapter, as shown in the figure below: 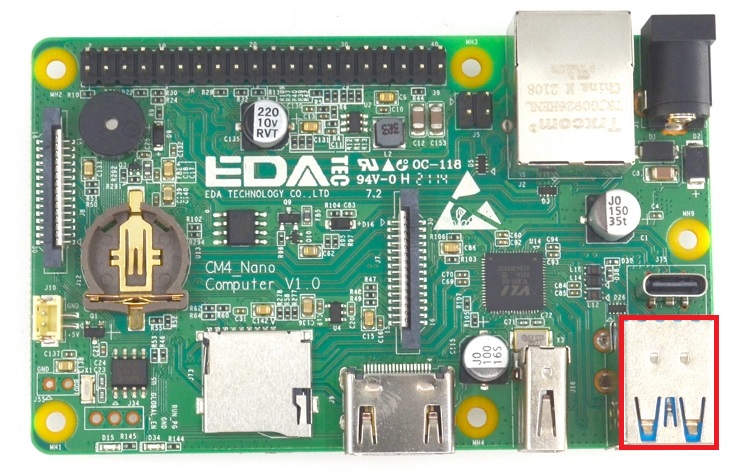 The cm4 module can optionally have a Bluetooth 5.0 BLE module on board for connecting to Bluetooth devices.

CM4 Nano has expanded the standard 40pin pin to be compatible with the expansion modules on the market. Contains 17 GPIOs, plus the following peripherals (can also be used as GPIO): UART, I²C, SPI bus with two options, +3.3 V, +5 V, ground. Each GPIO pin can be defined as an input or output pin, or as other functions. 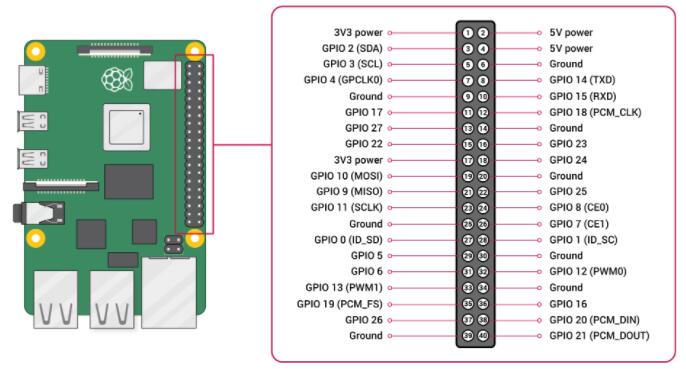 Two 5V pins and two 3V3 pins are present on the board, as well as a number of ground pins (0V), which are unconfigurable. The remaining pins are all general purpose 3V3 pins, meaning outputs are set to 3V3 and inputs are 3V3-tolerant.

A GPIO pin designated as an input pin can be read as high (3V3) or low (0V). This is made easier with the use of internal pull-up or pull-down resistors. Pins GPIO2 and GPIO3 have fixed pull-up resistors, but for other pins this can be configured in software.

As well as simple input and output devices, the GPIO pins can be used with a variety of alternative functions, some are available on all pins, others on specific pins.